Fire has razed down no fewer than 44 shops at the popular Farm Centre GSM market in Kano metropolis on Friday. 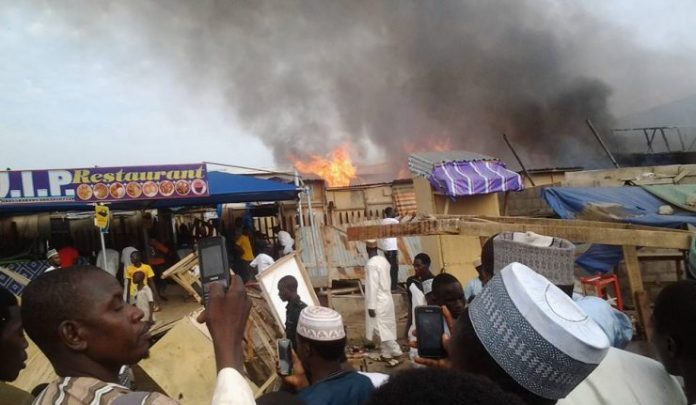 Eyewitness and one of the shop owners said in Kano on Friday that the incident happened around 530pm when most of traders had closed for business.

According to the witness, the fire which destroyed phones and other valuables worth millions of Naira, was said to have been caused by a spark from a converter supplying power to some of the shops.

The source said though no life was lost, but no fewer than 44 shops were destroyed by the inferno.

When contacted, the Director of the state Fire Service Alhaji Mustapha Rulwan confirmed the incident.

He said a total of 44 wooden shops were razed by the inferno.

“We received distress call around 5: 20pm and we immediately mobilised our personnel to the area.

“We were able to put out the fire within 45 minutes.”he said.

He said it was an inverter that was being used by some of the traders that caused the inferno as most of the affected shops were made of wood and zinc.”he added.

This is the second time the market was gutted by fire in the last eight months.

A Senate without Order

How to Break Bad Speech Habits

5 Wise Investment Tips for Men in their Twenties

6 Questions to Answer if You Want to Get a Promotion

30 Questions You Must Ask Your Spouse Before Getting Married